About the Mori Trio

"Families who play chamber music know each other inside out, and the Mori Trio was a classic example of this. They played the three works of the evening as if with a single voice: rock-solid, with a convincing view of each work’s particular idiom. The ‘Mori touch’ came across in a truly palpable presence of all three equal partners: decisive in expression, soft and yielding in tone, specially in the strings."

"The three musicians develop a beauty of sound that brings out the unique characteristics of piano, violin and cello. Carefully, with a gentle touch on the Steinway grand and subtle bowing in the strings, they explore the themes, build the dance-like elements in great arcs of tension... A delight, these Dvorakian Dumky movements, as played by the Mori Trio." 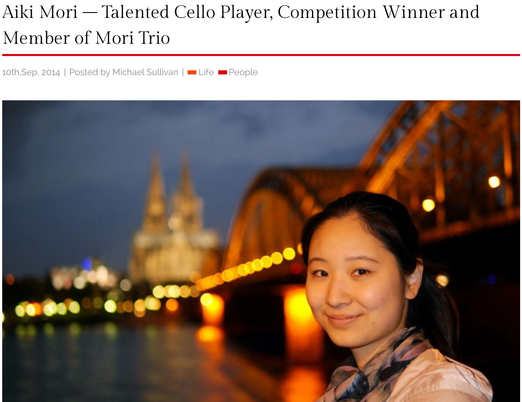 "Antonin Dvorak is the outstanding musician of Bohemia - in the noblest sense of the word. Like hardly any other composer, his music breathes the soul of his country, that joie de vivre that of course knows its dark side. It is precisely these downsides that come to bear in the interpretations of the'Mori Trio'.

Especially the Trio op. 65 is characterized by a strong dramatic impetus. The Mori read the work from the other side. The musical is not the focus here, but shines through again and again, occasionally displacing the thoughtful, occasionally even melancholic tone.

The reading of the F minor trio is coherent, it is conveyed vividly, differentiated with a hearty, warm string tone to which the piano adapts effortlessly.

Opus 90 is a little more lively, playful and virtuoso. This approach also makes sense, as it is a wonderful play with the Dumka, the Ukrainian folk song. All in all, it is an enriching Dvorak recording with an excellently disposed 'Mori Trio'."

"Instead of sharpening the contrasts and Slavic accents, the Mori trio impresses with a more balanced and sober approach, but without any paleness. The strings sound beautiful and expressive. The piano sings with finesse and discretion. And the recording, which was made in a church in Wuppertal, does justice to this moment of intimate musical exchange."

"In the Dumky the Mori´s cellist sets the scene with a great arc of sound and the constantly shifting tempos are well judged throughout,...

They patently relish the rapt sections of the second movement, while imbuing the fast writing with a rustic weightiness;... Poise is in plentiful supply in the Andante fourth movement, the cello richly sonorous against the quietly marching accompaniement of violin and piano, while the violin lets rip in the surging, soaring melody (track 8, 1´54"). This is constrasted with the sparklingly characterful allegro fifth movement, bringing out its folk elements with aplomb. ...a performance that impresses overall."